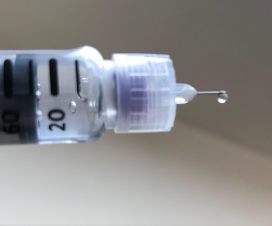 Since diagnosis, a year ago today, my eldest son had injected himself over 2,500 times with a needle like this in his stomach or thighs.

Out of the blue over the course of four days he had a thirst that could not be satisfied, he went to the loo a lot and felt just exhausted. These were the only symptoms that after a blood test at the GP sent us straight to A&E.

As well as the numerous times when I’ve checked him in the night and he’s been too high or too low. Seeing his face when he tips into a low, sweats, goes cold and grey and sometimes can barely speak. Looking at every food, food packet and menu with a magnifying glass to see the carb content, weighing all carbs and working it out, making adjustments for everything, and I mean everything, he eats or drinks. Dealing with highs when he feels dreadful, exhausted and drained. Days off school because he’s just been too exhausted or it’s all been too much.

The stupid comments; did he get it from eating too much sugar? How did he catch that? Why is he eating that, is he allowed? Why doesn’t he manage it better? Cinnamon cures it you know!

The only people who really understand are those who live this every day, the T1 community both face to face & those online. I’ve met two awesome local T1 Mums Louise Adams & Victoria Farrar and sharing with each other this T1 journey has been essential and much needed for both sanity and solidarity, love and understanding.

As a Mum having a T1 child critically shifts everything and it is pretty much what we think about all of the time, we have to, it never stops. Me and other T1 Mums are, as my son would say, just ‘beast’ at it. Just when we think we’ve nothing left in the tank due to worry, anxiety, exhaustion, lack of sleep and frustrations, we carry on. And so do our children, it doesn’t stop them, they just factor everything which takes time, thought and effort every single day. Add on top all the other normal life stuff and it’s a lot.

Children with Type 1 Diabetes are incredibly brave and strong, they don’t sweat the small stuff and it gives them incredible drive and self-belief.

Sometimes I wonder how we all got through the last year but we all have.

Photo shows the needles he uses and a drop of insulin.